Since its inception, humanity has had a close relationship with its spirituality and everything that transcends this physical plane and it could be said that these searches humanize us. Of course, these issues are a vital theme of contemporary audiovisual art for both its creators and its viewers.

The following audiovisual artworks delve into diverse metaphysical themes and questions, and address unconscious spiritual pursuits of their artists with their particular complexities. These images and sounds will find contemporary ontological clues that problematize from everyday aspects to the cosmos, the human essence and its relationship with technology and the economy, you will be able to glimpse mythologies and phantasmagorias, and reflect on the transcendence of the image and representations of the universe and its origin. 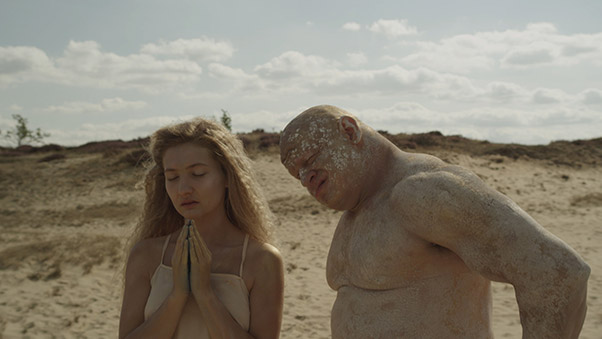 “The Annunciation” is a 2-minute experimental piece that deals with the classic biblical motif in which the angel Gabriel announces to Mary that she will conceive and be the mother of Jesus. This is one of the 14 works created in the frame of the Postkartenseminar from Wim Wenders on the Subject of “Glauben” (Faith) in the HFBK Hamburg.

Shortfilm inspired by the Greek myth Apollo and Daphne and in the poem by Francisco de Quevedo To Daphne, fleeing from Apollo. 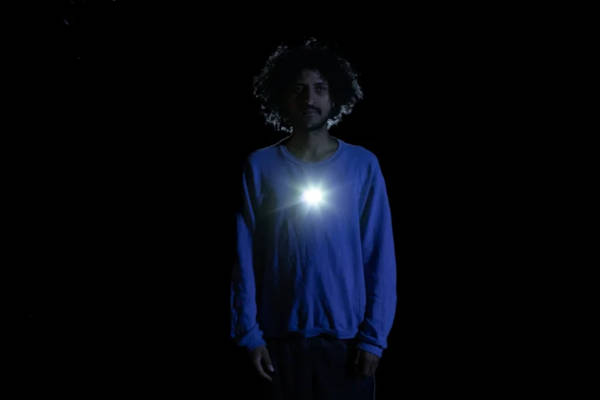 Does Juca come? On a full moon night, a group of friends should stay away from city lights on bicycle searching for a place dark enough to see a meteor shower. 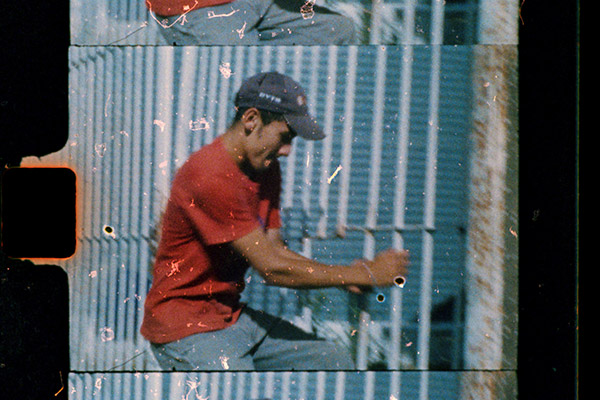 That summer without a home

Michel wanders through the fields surrounding the town. Kill time by driving your motorcycle on dirt roads. Night falls in the old cemetery and the boys swim among the dead. It’s a summer away from home. The storm and the destruction reign. 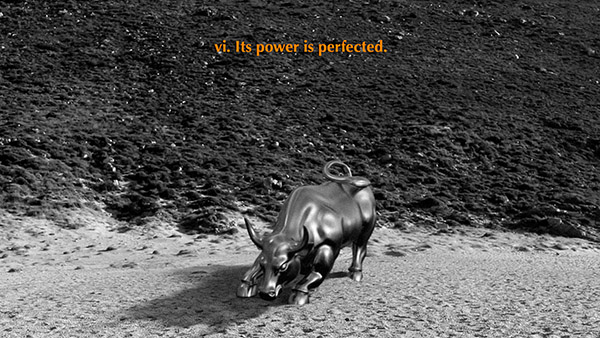 A company returns to the site of its birth in search of actualization, an alchemist fulfills an order request sent from the future, and the invisible hand manifests to guide its children towards the divine. 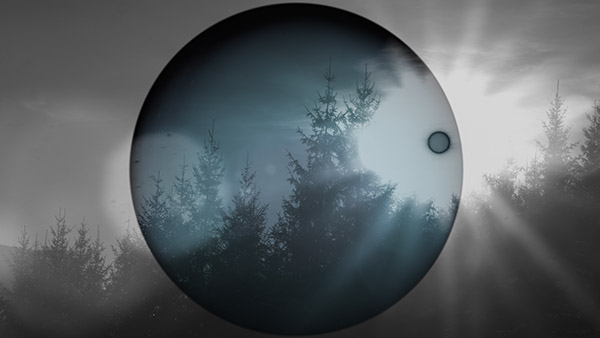 “LUKREZ RGB” interprets Lucretius’ revolutionary theories on the origin of our planet, the celestial bodies and the universe, with intense images. Written over 2,000 years ago the text, which the film is based on, unfolds a lost perspective, that seems outdated from today’s point of view. A thought pattern that seems incompatible with our modern research methods and theories, but yet it anticipates the findings of the present sciences. In Lucretius’ text this is shown in his doubt about a higher intelligence, that controls the formation of the universe. A distinction between mind and matter is alien to him, both concepts rank on the same level. In doing so, he allows chance a decisive role in the process of creating the cosmos, whose elements are reduced to their corporeal components. In analogy to this paradigm, the three primary colors red, green and blue refer in the film “LUKREZ RGB“ to the non-tangible. They represent the basics of the image, the light colors, from which all colors can be formed. The formal structure of each scene is determined by grids and arches. In the film the grid organises the image surface in a way that inseparably unites similar elements, creating a uniform overall structure, which in turn is broken up by the curves of the arches. According to the use of these basic elements, the film takes a look back at old techniques of film history with a twinkling eye, and plays with our perception by closely connecting documentary shots and fictional images, that interpret the text. The music by Cornelius Berkowitz follows the film’s images and the ideas of Lucretius into a world of shifted proportions and constellations, which transcends the horizon of our perception. The instruments appearing are the hammered dulcimer, theremin, violin, doublebass and effect pedals. – Carmen Baumschlager, 2018 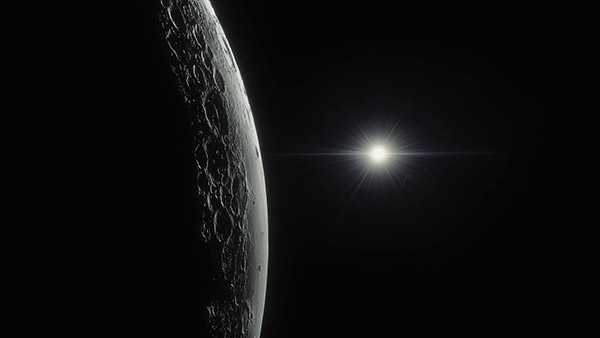 Dante Alighieri, in the Paradise of his Divine Comedy, described God as a pure light at the Empyrean, which was the place in the highest heaven. Also in the closing sentences of the last Canto (XXXIII) of Paradise, Dante wrote: “But yet the will rolled onward like a wheel in even motion, by the love impelled that moves the sun in heaven and all the stars.” Dante’s understanding relied on the understanding of celestial spheres, or celestial orbs, which were the fundamental categories of the cosmological models developed by Plato, Aristotle and Ptolemy. In this model there are seven spheres; Moon, Mercury, Venus, Sun, Mars, Jupiter and Saturn, respectively. And one more, eighth sphere for the fixed stars. Beyond this sphere there lies the Primum Mobile (The Unmoved Mover) which sets the outer sphere in motion, and so on through the inner spheres. This understanding pretty much stayed the same until the publishing of “On the Revolutions of the Heavenly Spheres” (1543) by Nicolaus Copernicus. In essence these same cosmic principles can be observed in Sufi rituals called the Sama. The word “Sama” has several meanings including; an act of listening, journey, sky and heavens. The origination of Sama in the Mevlevi Order of Sufis credited to Rumi who was a 13th-century poet, scholar, theologian, and Sufi mystic. The Sama is a Sufi dance ceremony (Dhikr) where a dervish’s body’s repetitive circular and whirling movement parallels the cosmic order and the basic underlying macrocosmic and microcosmic forms that are found in nature. In the state of ecstatic trance (Wajd), the dervish joining the choreography of the cosmos by dancing to its inherent rhythm, hopes to be united with the beloved through divine love, which is the same love that impels the sun and other stars to move, in Dante’s Paradiso . The Sama represents the journey of spiritual ascension through the various spheres to the unity. SAMA (2019) is a whirling cosmic journey of ascension, starting from ‘Khaos’, an ocean of unmanifested form, a void state preceding the universe’s birth to the sphere of planets of the solar system, to stars, Primum Mobile and beyond. Both, the visuals and the sound of the film are designed in order to encourage the viewer on a state of deep meditation and contemplative trance. 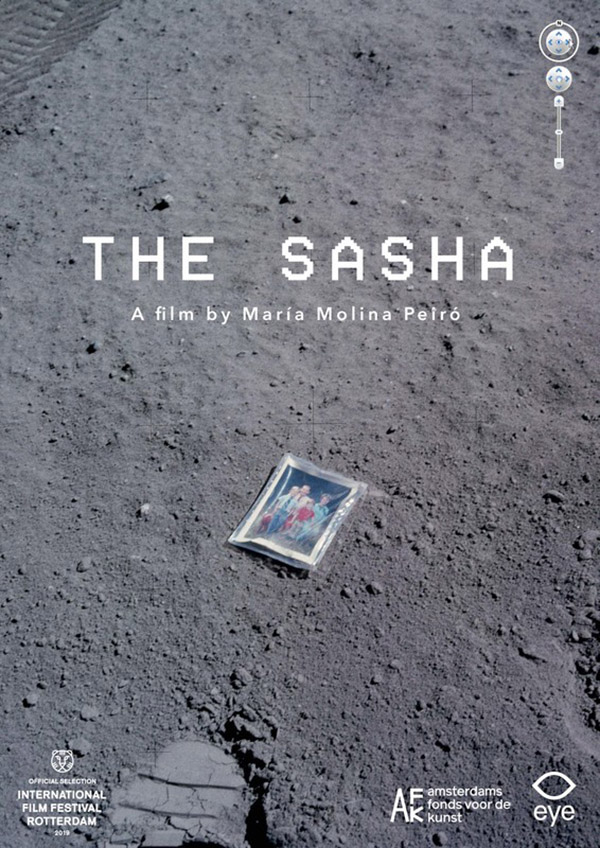 On 1972 the astronaut Charles Duke landed on the Moon on the Apollo XVI. He was in charge of taking photos of the lunar surface with a high-resolution camera. ‘The Sasha’ is a film about the human perspective on Earth and our constant struggle with our temporal and spatial limitations. From the exploration of space to cyberspace, from an analogue Moon in 1972 to a virtual Moon in Google Earth today. A story about parallel universes where eternity seems to be lost between frames and interfaces. 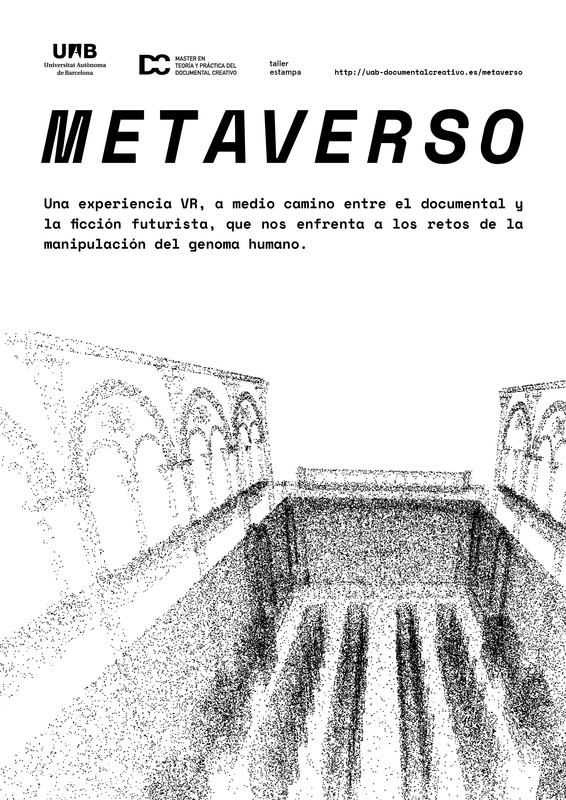 Is the human race ready to master its own evolution? A VR experience, halfway between documentary and futuristic fiction, which examines the challenges of manipulating the human genome. Metaverso VR let the user reflect on the scope of the genetic modification in “Human Beings”. Through interactive choices, the user will build a hypothetical future, making possible a single experience to each user. Metaverso was finished as an apk for android, so you need a VR headset to enjoy it.